Mac and the Skillet Lickers- Part 1 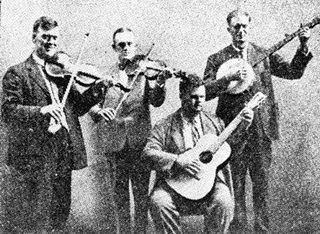 Clayton McMichen was one of the founding musicians in the early country music supergroup, The Skillet Lickers.

Missing from the photo is Bert Layne (fiddle) who played on the first sessions.

In the early 1920s Atlanta was the "country music" capital of the world. There was Georgia Old-time Fiddler's Convention that drew huge crowds was held yearly in Atlanta. WSB radio began broadcasting local country musicians; Fiddlin John Carson was featured on the first broadcast and Clayton's "Home Town Boys" on the second broadcast. Riley Puckett joined Clayton on subsequent broadscasts and the Home Town Boys became one of the featured and most requested stars on WSB.

Then Okeh Records and Ralph Peer sent Polk Brockman to Atlanta with a portable recording system in 1923. They waxed several songs by Fiddlin' John Carson and to Peer's surprised scored a huge hit with Carson's "Little Old Log Cabin in The Lane." The floodgates were open, other record companies started searching for "country music" talent.

Columbia Records hired Frank Walker to head up their "old-time songs" or "songs from the hills" country music division. Walker knew Riley Puckett was one of the biggest starts on radio station WSB so he sent for Riley to come to New York.

McMichen wrote John Edwards on Jan 5, 1958 that Columbia had wanted the duo based around him and Puckett but McMichen was out of town at the time they scheduled a session with Riley so Gid Tanner went instead.

On March 7 and 8, 1924 Gid Tanner and Pucket waxed their first sides for Columbia in New York City. Among the songs were "Chicken Don't Roost Too High," "I Don't Love Nobody," and Black Eyed Susie." When these songs were successful they were called back to NYC in Sept. 1924 and recorded 14 more sides.

Walker meanwhile obtained a portable recording system similar to Ralph Peer's at Okeh and started making trips to Atlanta to do field recordings. While in Atlanta in April 1926 Walker scheduled McMichen and Puckett to do a session and decided to combine the best Atlanta musicians in one group. That group included his recording stars Tanner and Puckett while adding McMichen (fiddle) and Fate Norris (banjo).

McMichen, who was never satisfied with the playing of Gid Tanner, brought in his brother-in-law Bert Layne. McMichen was used to playing with Layne, who played a lower harmony part to Mac's lead. Layne occasionally played lead on waltzes but for the most part he played lower harmony.

Because Mac had cut some recorded for Okeh with his Home Town Boys in 1925 he was under contract with them at the time of the April 1926 Skillet Lickers' recordings. Putting Mac's name could jeopardize the session so Walker named the group, Gid Tanner and His Skillet Lickers with Riley Puckett.

The 1926 session scored a string of hits eclipsing anything Columbia has done up to this point- even Charlie Poole's huge hit, "Don't Let Your Deal Go Down." Mac became very unhappy that his name was not on the records and that Gid Tanner was getting credit for the fiddling.

At his insistance his name was included in the next session but according to Mac, the damage was already done. He would remain bitter about this for years and later commented, “Two or three in there couldn’t play” and that he didn’t like playing with Gid Tanner and Fate Norris because “they was just thirty years behind us in the music business.”

McMichen came up with the name The Skillet Lickers, a variation on the name of his earlier Lick the Skillet Band which was based on the earlier local assemblage with Fiddlin' John Carson known under the Lick Skillet Orchestra name. Fate Norris played with Mac in that early group. The name "skillet lickers" refers to the impoverished rural settlers where the skillet had to be licked clean in order to feed everyone.

It's important to note that Columbia paid musicians a flat fee to record while at Okeh, Ralph Peer gave the musicians a cut of the royalties. Okeh recording star Ernest Stoneman was making $6,000 in royalties alone by 1927 which was more than triple the wages a normal working job at the mill. Okeh's Henry Whitter got rich from the "Wreck of the Old 97." The record reportedly topped seven million units and according to Whitter, his royalties exceeded “twenty-three thousand dollars,” a huge fortune at that time (approximately $400,000 today). Henry, who didn't even write the song, bought a brand new car and quit his job. He was now a recording star.
When Columbia's Charlie Poole had a huge hit with "Don't Let Your Deal Go down" he received a flat fee of $75 which he split three ways- his take, $25. The record sold 102,000 units, making a huge profit for Columbia (the average record sold 5,000 units). Naturally Poole wasn't too excited to record again- he realized how much money Columbia made from him on that one record.

McMichen was on hire by Columbia Records from 1926 until 1931 when the depression stopped making records profitable. He was paid a larger than average flat rate (Layne in an interview gives $1,000 as a figure but this is surely wrong and was just given by Layne as an example of the flat fee which varied among artists) and made good money recording.

Richard L. Matteson Jr.
Hi, my name is Richard L. Matteson Jr. My goal in life is to do as much as I can while I can; To share as much of my talent, my thoughts and my feelings with as many people as I can. I want to thank God and the people that have supported me and encouraged me in my journey. Hopefully I can give back and accomplish deeds that others can benefit from after I'm gone. I've had the good fortune to play or share the stage with some of my guitar heros including Doc Watson, Chet Atkins, Roy Clark and Charlie Byrd. I was the President of the Piedmont Guitar Society in Winston-Salem for 17 years and helped the PCGS become a leading Guitar Society. I also started writing music books for Mel Bay Publications and have now written 10 books- my last book, Bluegrass Picker's Tunebook, is still selling. I also have sent in two more books that Mel Bay will eventually publish. After moving to Oquawka, Illinois in 2007, I moved to Louisville KY in 2008. For more about me you can check out my web-site: BluegrassMessengers.com